Yesterday I was censored from a complaint to Facebook and to say it rattled me would be an understatement. What rattled me even more was commentary from two Syracuse University Newhouse School professors, Assistant Professor Amy Toensing and Adjunct Professor Rafael Concepcion who rushed to judgement without any facts.

Here is the photo in question.

Quick background. I do think that Henri-Cartier Bresson and Jay Maisel along with many others would have shot this had they had the opportunity. One of my points was simply that if I had to sum up South Florida in one picture for a story this would be the one. Additional let it be known that I did have a release.

Since my childhood I wanted to go to the Newhouse School. After all many uncles and cousins graduated from Syracuse and my mom and one of my brothers continued the legacy. I was so keen on Newhouse that I did not apply to any other school and was accepted on early decision. After graduating I taught in the photography department for a semester and have lectured there alone and with colleagues Stephen Wilkes, Eric Meola and Clint Clemens. I have always been proud and honored to say I graduated from Newhouse.

Yesterday I had to put all of that in question. When I studied photojournalism at Newhouse several things were drilled into my brain. What, When, Where and that as a journalist you cover a story without personal opinion. Most important make sure you get all the facts…. I have covered many controversial subjects including Nazi demonstrations and have always tried to cover the event fairly and without personal opinion.
Needless to say I was taken back when two professors slammed me without any facts all of which could and would have been answered in an open forum. Neither apologized for being wrong on any level and as they represent Syracuse it has left me questioning what is going on at this prestigious school.

There was commentary from some people that my post from yesterday was an invasion of personal privacy. It raises an interesting issue about nudity in art and photography generally—are nude or partially nude photos of people posing for a photograph featured in Vogue magazine an invasion of privacy and no longer artistic because they embrace sexuality? Are sculptures in museums of naked men and women an invasion of the privacy of those who posed for them hundreds of years ago? What about paintings in some of the most elite museums across the world that show nudity? Certainly those posing for art made hundreds of years ago didn’t anticipate that it may end up in a museum for billions of people to see for centuries to come. Does context matter?

This is precisely the type of dialogue that we should be discussing as a community and especially as we teach younger generations of photographers. What makes art “art”? Certainly context matters. What if someone is posing nude in the public? Is it an invasion of privacy to take a photo of them if they chose to display themselves to the community? In the law, the Supreme Court has made clear that you don’t have a reasonable expectation to privacy if you display something that is publicly available for all to see. So this begs the question, it is an invasion of privacy to take a photo of someone who chooses to walk down the street nude for all to see?

What saddened me was not the fact that some people may have varying opinions, but a rush to judgement on a photograph without even thinking about what was the context of this? What if this person had asked me to take this photo? Or it was part of a photo shoot? Or they knew exactly what was happening and just didn’t care? It’s this rush to judgement that endangers the creativity of future generations of photographers and artists. If we censure a new generation of artists in this way by immediately rushing to judgement and stating an image must represent one thing and one thing only or otherwise it’s “wrong”, doesn’t that fundamentally undermine what art is really about—That art should be open to perspective, interpretation and discussion. And yes, sometimes beautiful art can be controversial, but does that make it “wrong?”

With all this in mind I have chosen another photograph which is one of my favorites from Antarctica to raise further questions and discussion. Anyone can take a photograph but to me it is not what the photograph is of but rather what it is about.

I am not a landscape photographer. I am not a wildlife photographer. I am not a people photographer. Yet all of these genre can fit into my repertoire of images.
I photograph things that are invisible to most people.
I feel a magnetic connection I sense between myself and my subject. My camera becomes an extension of my mind , allowing me to journey into a very personal energy field from each subject, breaking boundaries and opening doors. The experience elicits a sacred feeling suspending time and capturing energy.
I love environments that are otherworldly and surreal where I can explore conscious and subconscious energy and a fantasy I see in nature.
Through the use of metaphor my vision explores feelings of sensuality and illusion, but at the same time emphasizes our fragile environment, instilling a sense of responsibility to preserve it from further destruction.
This particular image makes many folks think about female anatomy. Is that vulgar? Is a “naked iceberg” allowed on Facebook. I would love to further discussion and commentary and will continue to push the envelope…
Thanks for reading:
Seth 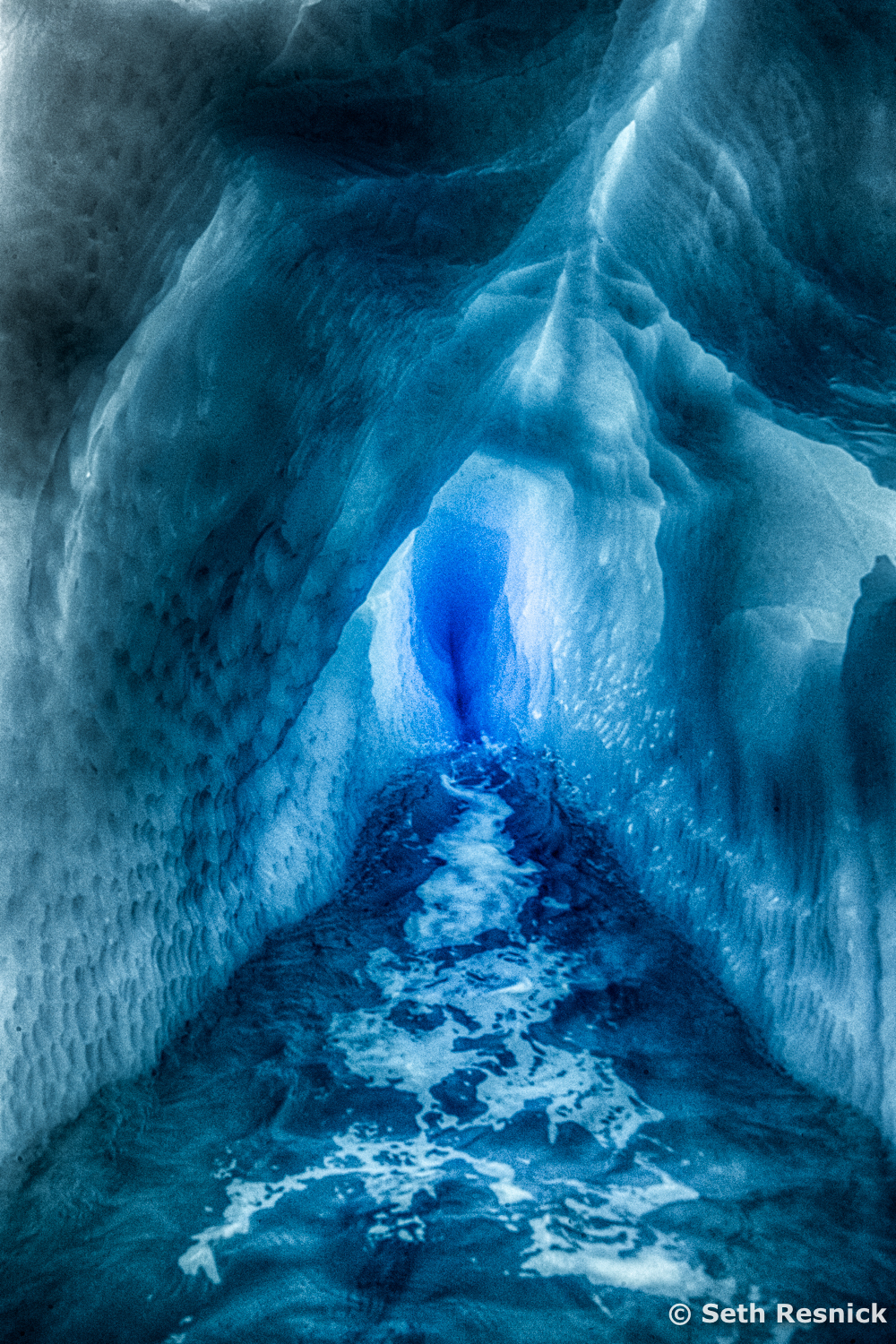 Seth Resnick and X-Rite ColorChecker Passport – Behind the Scenes

Be the first to know about new trips & workshops

All photographs, text and html coding appearing in the Seth Resnick Photography site are the exclusive intellectual property of Seth Resnick and are protected under United States and international copyright laws.

The intellectual property MAY NOT BE DOWNLOADED except by normal viewing process of the browser. The intellectual property may not be copied to another computer, transmitted , published, reproduced, stored, manipulated, projected, or altered in any way, including without limitation any digitization or synthesizing of the images, alone or with any other material, by use of computer or other electronic means or any other method or means now or hereafter known, without the written permission of Seth Resnick and payment of a fee or arrangement thereof.

No images are within Public Domain. Use of any image as the basis for another photographic concept or illustration is a violation of copyright.

Seth Resnick Photography vigorously protects copyright interests. In the event that an infringement is discovered you will be notified and invoiced at the minimum 10x the STANDARD FEE for unauthorized usage and/or prosecuted for Copyright Infringement in U S Federal Court where you will be subject to a fine of US$150,000 statutory damages as well as all court costs and attorneys' fees. By entering this site you are agreeing to be bound by the terms of this agreement. Entrance to site is expressly on these conditions which embodies all of the understandings and obligations between the parties hereto. ALL ENTRIES ARE LOGGED. To secure reproduction rights to any images by E-Mail send to [email protected] or call Seth Resnick Photography (561) 249-6676